Check back here for updates from our team!
Posted by Mission Team at 11:22 AM No comments:

As arranged I arrived in the car lot of Our Savior at 6am, ready to help the packing of the van.  To my surprise (and great delight) I found that my fellow goers had all ready arrived ahead of me, and other than a few bits and bobs (mainly my large suitcase) most of the van was ready to go.

Pastor was there nice and early to wish us well, and after a prayer at 6:26am we were off o the road.  Cliff at the wheel, the route was set.

The plan was to hit 128 and pray that we would miss the traffic.  Looks like someone was not praying hard enough, because we found ourselves in the middle of the rush hour.  Always wonder why it has that name, as there is genuinely no rushing going on.

I don’t think we were on the road but an hour before the first request for a rest was heard, actually this one was me…Coffee was high on the requirements list to help stay awake.  We were soon back on the highway heading to New London to catch the ferry across to Long Island.  The ferry leaves on the hour every hour, and we were aiming for the 10am departure.  All things were on our side, GPS said we had time, the traffic was light to non-existent, but then…Potty BREAK.    We did arrive at the ferry port with a minute to spare, and on arrival we were asked …Do you have a reservation?  NOPE….Fearing the worst a one hour wait poor Connie felt bad and kept saying if she knew we were rushing she would not have asked to stop.  However that was all in vain as they allowed us to board, and we pulled on to the ferry.  We had not even left our vehicles as the ferry pulled out of port.  That was close.


Orient Point NY was our landing spot.  Just one road leading the way out so getting lost at this stage was not possible.  We drove through some wonderful scenery, beaches and vineyards on both sides for as far as the eye could see.  We soon stumbled across a quaint little restaurant called Skippers, and decided this was the place to have Lunch.  The food was lovely and very much needed. 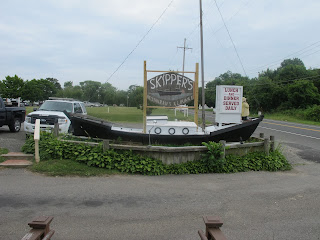 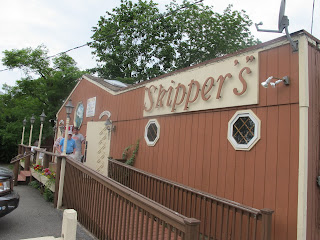 Next it was off to meet out guide Tom.  Meeting point was a gas station of of Interstate 495.

Tom was a cheery fellow, we all introduced ourselves and then we all followed him to the Disaster Relief center where we had to have orientation and sign our waivers.  Whilst there we were given a tour of the warehouse they use to store all of their supplies.  The place is HUGE.


Next it was off to the place we would be calling home for the next few nights.  I think it is fair to say that we were a little anxious about this part, not having heard any thing other than warnings about the area, including from the volunteer center.  When we arrived it was clear to see that we were not exactly in the posh part of town, not even close.  All of the buildings were either covered in security grills or gates, and those that were not were covered in boarding’s.  Right in the middle was Christ Risen Lutheran Church.  You can see it is old, and it too was completely covered in grills and cages all round.  We opened the cage to the car lot and pulled in. 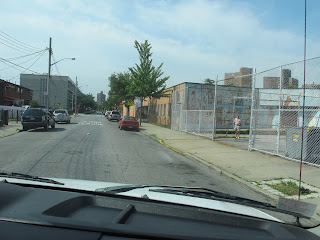 The inside of the building still has the primary school feel to it, even though it has not been used as a  school for over 6 years.  There are several class rooms still with the old desks and chairs.  We chose our dorms, and started to unpack.


After a wonderful dinner, a little ghost adventure (thanks to Constance and her wicked sense of humor) we were finally ready for BED.  Good Night Brooklyn.  Tomorrow will be a busy day.
Posted by Mission Team at 11:21 AM No comments:

5:15am came around way to quickly.  Thinking I would be the only one up, I wondered off down the dark corridors to the make shift showers.  Morning Bill, I said as he left the shower room.
It is now 6:15 am, and everyone is up….Nope not Everyone…Has anyone seen Constance?  As Arthur just said.  No worm for Connie.
After an interesting drive to the first site, we arrive at our destination 297 S Brookside Avenue, where the neighbor Hernandez who shared with us his experience of Sandy cheerfully greeted us.  The front of his house looked great, you could see that a lot of recovery work had gone into it.  Then he shared with me the reality of his circumstances.  Hernandez invited me around his house to the back and the damage was heartbreaking.  His entire first floor was gutted, and his access at the back had been swept away.  The stairs are now propped up about 2 feet away from the house.  He explained to us how high the water came up which is approx 10ft.

Lloyd the owner of the house we were there to work on came out to introduce himself to us.

He explained what damage had been caused to his house, and what work we were there to be doing.  Today’s job is to enter a crawl space underneath the first floor, no higher than 2ft and to remove everything from inside for disposal.

It took less than 10 minutes and we had our first casualty of the trip.  Inside the room which was very large, very damp and very dark, there was an abundance of debris, including broken glass and rotten sheets of iron.  Unfortunately the space was so small, one had to crawl around on hands and knees and a shard of glass found its way into my knee.
Janice was amazing, not only cleaning out the wound but ensuring it was clear of any dirt, and she patched me up good as new.  Connie took my place and suited up to join Arthur inside the crawl space, however within minutes the only source of light we had blew.  In the short time we were there we had removed a sizeable quantity of items, but now without light and adequate protection for our knees, Ian decided to call the job off until new equipment could be sought.
Our next job was about 7 miles away from Lloyds.  It was in a town called Massapequa.  The road itself was very similar to S Brookside Avenue, Canal on one side and Sea on the other.  They were both completely surrounded by water.  However at this new location the wrath of Sandy was much clearer to see.

Across the Canal you could see houses that had been totally destroyed, in fact all round it was a rather common site to see.  Either the properties were on demolition sites ready to be torn down, or they were construction sites being repaired back to their former glory.

Our little bungalow on 8 Division Highway on the outside did not appear to be as bad as most of the surrounding properties, however once on the inside, it was a completely different picture.  There were no floors and there were no walls.  On this site we are going to be doing some demolition work, (Actually that was Cliff), but mainly we were to remove all of the nails and screws from all of the beams that remained, Brush and hover away all of the large debris from around the framework and then to treat the entire house with Shockwave to treat the mold.

Other than a short break for lunch, we worked hard for the next four hours.  Everything that was needed to be done was done as requested.  I was very proud to be working alongside all of the team where everyone got stuck in and gave it their all.
3:30pm came and we were all hot, sweaty and exhausted, but I think we were all proud of what we had achieved.  There was just one last thing to do before we left.
Within minutes of finishing Ian and myself stripped to our boxers and ran into the ocean for a ten minute much needed swim.

Finally we are home back in Brownsville Brooklyn and discussing what to do for food.  Cliff and I are determined that tonight we are going to find a Grill and we are going to enjoy the plethora of sausages that Cliffs boss had donated to us.  We found that Grill and we all ate to our hearts content.  Not only is Cliff a great driver, an awesome demolitions expert, but now I am happy to say he is a mean cook. 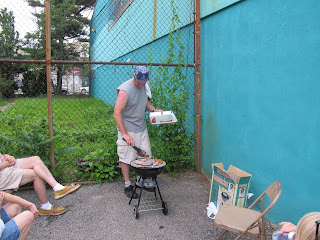 Good night all.  We are up early tomorrow and back to Lloyds to continue where we left off.  My prayers are with the team, hopefully we have the right equipment this time and no more casualties
Posted by Mission Team at 11:21 AM No comments: